Below, you will find answers to frequently asked questions. Click on a question to show the corresponding answer.

What is sales packaging?

Packaging are products manufactured from materials of every description for the containment, protection, handling, delivery or presentation of goods, which may range from raw materials to processed products. It is passed on by the packaging manufacturer via the manufacturer/filler of the packed good and different stages of distribution, to the last distributor or even directly to the end consumer. Sales packaging is packaging made available as a sales unit, arising at the end consumer. Sales packaging within the meaning of the German Packaging Ordinance ("VerpackV") also includes such packaging provided by retailers, restaurants and other service providers as facilitates or supports the transfer of goods to the final consumer (service packaging) as well as disposable dishes.

Who is the manufacturer / distributor?

What is a „private end consumer“?

According to the German Packaging Ordinance, consumers are the people who receive the goods and do not sell them on in the form they were delivered in. According to the German Packaging Ordinance, private end consumers are households and similar places where waste arises, including restaurants, hotels, canteens, administrative institutions, barracks, hospitals, educational institutions, charitable institutions, freelancers and typical places where waste arises in the cultural field such as cinemas, operas and museums, as well a leisure sites such as holiday camps, amusement parks, stadiums and service areas.

Comparable places where waste arises also include agricultural holdings and craft enterprises, which can have their packaging material disposed of at the rate normally associated with private households using normal household containers for paper and board and lightweight packaging with a capacity no greater than 1,100 litres for each material.

Who can carry out the licensing as a "delegated third party" of an initial circulator in a dual system?

The Federal Ministry for the Environment (BMU) states that "This does not restrict the party subject to the obligations from using a delegated third party to fulfil these obligations in accordance with § 11 of the German Packaging Ordinance". The Federal Ministry for the Environment (BMU) therefore does not rule out using a trade company as a "delegated third party". The well-known environmental lawyer Prof. Dr. Reinhard Hendler from the Institute for Environmental and Technology Law at the University of Trier has also assessed this option and reached the conclusion that the initial distributor can "also transfer the system participation obligation to a third party such as a retail company".

Who is responsible for licensing for commercial own-brand products in a dual system?

As with industrial brands, the technical "bottler" of the packaging as initial distributor is subject to licensing requirements for commercial own-brand products in a dual system. The trade company is regarded as the "bottler" under the following condition: A trading house is regarded as bottler/packaging company, where they are named exclusively as bottler/manufacturer on the packaging and hold the trademark rights (see LAGA homepage: www.laga-online.de).

If this is the case, the trade company must fulfil the requirements for this own-brand product sales packaging in accordance with the German Packaging Ordinance. This also includes handing over the CS. The trade company can also commission a "delegated third party" to fulfil these obligations.

What is a branch-specific collection and recovery solution?

An independent expert must confirm that the sales packaging quantities included in a branch are collected regularly and free of charge via suitable branch-specific collection structures at all places where deliveries where made where waste arises and that the packaging is recovered correctly. The relevant proof must be presented to the responsible regional authority before beginning the branch activity. In practice, the collection and recovery are organised for the manufacturers and distributors by delegated service providers.

What is a completeness statement?

A completeness statement (CS) is a certificate to be provided by the initial circulatior as proof that all obligations regarding sales packaging brought into circulation in the calendar year have been fulfilled in accordance with the ordinance.

Initial circulators exceeding a certain packaging quantity must complete a CS for sales packaging brought into circulation in the previous year by 1 May. The CS must be checked and approved by an accountant, independent expert, tax advisor or certified auditor and then stored electronically by the initial distributor with the relevant Chamber of Industry and Commerce.

Print version
We'll be pleased to help you!
Contact us under: 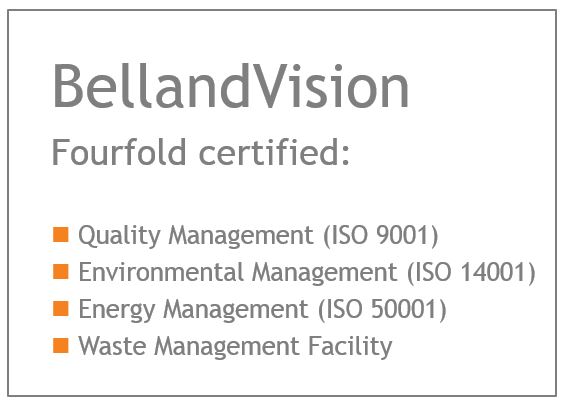 more about our certificates
Service